More than 50% of the 3000-people strong R&D team of OPPO in China, work on the India market, the largest market after China, Yang had added.

So, the Chinese got the product strategy right—sleek devices with mass-appealing features such as selfie cameras at under Rs 20,000.

The other strategy piece the Chinese got right was their distribution.

“They appointed individual distributors at the regional level to maintain a tight control over the distribution and pricing, as opposed to the traditional three-tier distributor network consisting of national, regional and local distributors,” says Pathak. This meant that a company like OPPO wouldn’t tolerate if a vendor sold its phones at a different or a lower price, be it offline or online (where it started late 2015). This gave it a good reputation in the distributors’ community.

To reach consumers first and fast, Chinese firms offered distributors a 5-7% higher margin than their Indian counterparts, say industry experts. Over and above, they rewarded them with generous incentives. Like trips to the Maldives or other countries, if they met their targets. Which was not a big cost for these firms having already reached economies of scale.

Next came branding and marketing

They invested in Bollywood and cricket. And since 2015, it has become a battle of sorts. From signing Bollywood stars as brand ambassadors to sponsoring reality shows, movies and cricketing events like the Indian Premier League (IPL), the Chinese smartphone makers went all out. For instance, Vivo became IPL title sponsor in 2015, while OPPO was a sponsor to IPL 2016. This year, Vivo grabbed the IPL opportunity, and OPPO brought Indian cricket team’s sponsorship rights. 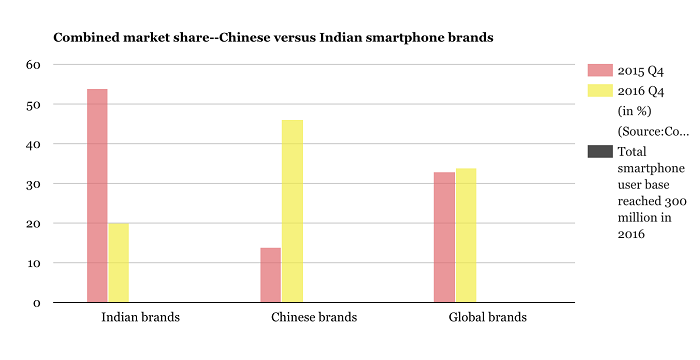 Not that the Indian companies didn’t try to gain control over the distributors’ network or invest in enhancing their brand image. Going any extra mile would have eroded their gross margins—at a time when they were already losing market share.

Made in China vs Make in India

Most of the Indian smartphone makers had announced their ‘Make in India’ plans in 2015, investing large sums of money into assembling units. Only to face supply constraints very soon thereafter.

“The ODMs that built microchips, memory cards, screens, etc., their entire factory capacity was getting absorbed by the Chinese [smartphone] manufacturers,” says Jaideep Mehta, managing director – India and South Asia at IDC. “So Indian companies were hit by component shortages.”

Pathak agrees. “The moment they [OPPO and Vivo] started rising in China, supply chains were tilted in their favour because they [component makers] knew who were the ones doing high volumes,” he says. “It raised the cost of the components, primarily the memory chip and screens by about 5%. Each contributes to one-fifth of the total component cost.”

Adding fuel to the fire, many Indian firms made the mistake of over expanding. “Micromax and Intex decided to launch televisions for example—in hindsight, it wasn’t a wise move because it drained their resources,” says Mehta.

Over the last two years, the cost for Indian smartphone makers has increased, in manufacturing, distribution, marketing and branding. And for the lack of innovative products, their market shares have kept declining so much so that today, none of them rank in the top five.

The Ken sent multiple emails and made many phone calls to Vivo, OPPO, Gionee, Micromax, Karbonn and Lava but none of these companies were willing to speak.

Each for their own reasons—the Chinese firms are prepping for a more aggressive fight, and the Indian firms have taken a step back, choosing to lie low for a few months to bounce back with a new game plan.